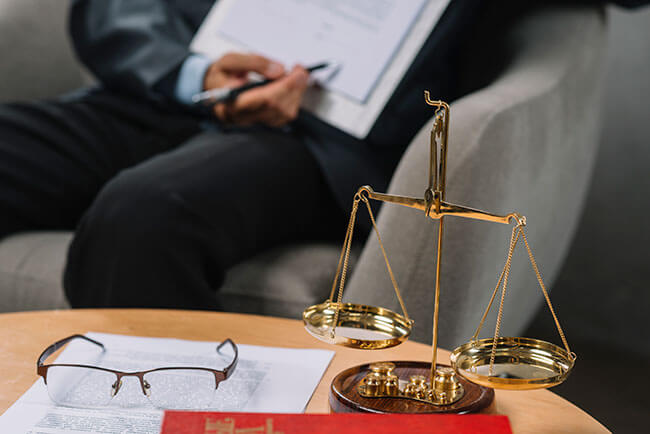 We provide first class legal advice and representation and treat everyone as individuals; client care is an essential part of this. We are available 24 hours a day and can be reached on 0208 751 5115. One of our criminal law solicitor team will be happy to assist you.

Other areas of specialism relating to Criminal Defence include:

What happens at the police station?

If you are arrested and taken to the Police station or if the Police invite you for an interview regarding an allegation, then you are entitled to free and independent legal advice from a firm of Solicitors who hold a legal aid contract. Everyone is entitled to a Criminal defence lawyer in London or any other part of the country.

If you are arrested, then you will be booked into a custody suite where your personal details will be taken including your fingerprints, DNA and a photograph. Depending on the type of allegation, further forensic samples may also be required. You will be given the opportunity to consult a Solicitor to decide whether to provide these additional samples.

In general, you are entitled to an independent Solicitor of your choice, to have someone informed of your arrest (unless exceptions apply) and to consult/read a copy of the Police and Criminal Evidence Act (PACE) Codes of Conduct.

As a starting point the police can detain you for 24 hours but this can be extended with permission of the Chief Superintendent for a further 12 hours. Any further periods of detention, which could extend the detention to 72 hours would need to be approved by a Court.

The officer investigating the matter will then want to conduct a recorded interview and ask questions about the allegation you face. Prior to this, the interviewing officer will provide us with disclosure, and we will be able to have a private consultation to advise you on the offence/allegation, to discuss your options in interview and provide our advice to you. You will then be interviewed.

Once the interview has taken place the officer will then need to relay the information to a supervisor/custody sergeant who will decide on what will happen next. In most matters the case is referred to the Crown Prosecution Service who will decide whether or not there is enough evidence for the matter to progress to Court Proceedings.

The possible outcomes at this stage are:

Our Team can provide expert legal advice in all aspects of Criminal Defence.

What happens at the Magistrates Court?

The type of offence will dictate the procedure. For example, a charge of drink drive will stay in the Magistrates Court unless it is linked to a more serious offence. Whereas a charge of Murder will always be sent to the Crown Court.

Allegations are split into three categories: Summary Only, Either Way and Indictable Only.

Dependent upon whether you plead guilty or not guilty, this will also determine what happens in the Magistrates Court and again it depends on the type of offence you have been charged with.

In general, if you plead guilty then the Court will proceed to sentence you but the Magistrates, for certain offences, can still send the matter to the Crown Court for sentence. Pre-sentence reports (PSR’s) may be ordered, and these are prepared by the National Probation service. A PSR involves you meeting with a member of the probation team who will interview you and gather information about the offence, you and your circumstances and make recommendations to the Court regarding sentence. The Court is not bound by the recommendations made in a PSR however will take the contents of the report into consideration.

If you plead not guilty, then the case will be listed for trial. This might be in the Magistrates Court or in the Crown Court depending on the type of offence.

If you case has been listed for trial, then the Court will embark on a case management exercise to make sure everything is in order and ready for the trial to be heard. This usually involves determining which witnesses are required on behalf of both the Prosecution and the Defence. There could also be legal arguments which the Court may need to determine, and the Court will make directions which both the Prosecution and Defence need to comply with. Following this, the matter would be fixed for trial.

If you are granted bail, then this could be either conditional or unconditional. Conditional bail means that you will be made subject to conditions which you will need to comply with until the conclusion of the case. In some cases, the main reasons the Court will keep a person in custody until their trial or sentence date if there are concerns that if you remain on bail you would interfere with witnesses, commit further offences whilst on bail or fail to surrender.

What happens in the Crown Court?

At the PTPH, you will be expected to enter either a plea of guilty or not guilty. You will be advised accordingly depending on the instructions you provide and the evidence against you.

Anyone who pleads guilty to a criminal offence will be given credit for an early guilty plea. How much credit will depend on when the guilty plea was entered. More credit is given, the earlier the plea is entered.

If you plead not guilty and get found guilty by a Jury, then you will not receive any credit.

The PTPH is an opportunity for the Court to set a trial date once a not guilty plea is entered. The Court at this stage will set a timetable for certain stages to be completed to ensure the smooth running of your trial. These stages are known as the Stage Dates and are generally as follows:

Stage 1 Prosecution to serve their case and any applications for Bad Character/Hearsay evidence.

Stage 2 The Defendant to submit a Defence Case statement (DCS)/ Serve any expert evidence relied on.

Stage 3 The Prosecution to respond to the DCS and provide further disclosure.

Stage 4 Application for witness summons for third party disclosure/Trial readiness certificate/Defence respond to any applications served by the Prosecution.

The Court will be provided with details of the witnesses required on behalf of the Prosecution and the Defence and consequently the matter would be listed for trial. Depending on the nature of the case, the trial will be listed as a fixture, meaning that you would be given a fixed date for the trial, or be placed into the warned list. This means that the case is put into a two week list and we are only advised by the Court the day before as to whether the case will be heard the following day.

At Darton Law we can provide you with expert legal advice and representation at all stages of the Crown Court process.

In instances where you have been kept in custody, you have two opportunities to make a bail application. Once in the Magistrates Court (except for serious offences such as Murder) and once in the Crown Court. Unless there is a change of circumstances, no further bail applications can be made on your behalf after the second application.

What happens at a trial in the Magistrates / Crown Court?

The trial process in the Magistrates or Crown Court is broadly the same. The purpose of the trial is firstly for the Prosecution to present their case via witness evidence/exhibits. At each stage, the Defence has the opportunity to challenge this evidence through cross examination and putting your case to the witnesses.

Not all evidence comes from a live witness and can be presented by reading agreed statements via a document of agreed facts.

After both, the Prosecution and Defence have presented their cases each party will deliver closing speeches to the Jury (in the Crown Court) and Magistrates (in Magistrates Court) followed by the Judge (in the Crown Court) summing up the case. The Jury or Magistrates will then retire to consider their verdicts. These could be guilty/not guilty or a mixture, or the jury might not be able to return a verdict (Hung Jury).

In the event of a hung jury, the Prosecution will make a decision as to whether they consider it would be in the public interests for a retrial.

Should you be found guilty, the matter will proceed towards sentence. The procedure would be the same as that in the Magistrates Court whereby the Judge would order a pre-sentence report which is prepared by the Probation services. In the event the Judge believed that they did not require a pre-sentence report, they would sentence you on conclusion of the trial.

This page is related to: criminal law solicitor

Darton Law Limited is authorised and regulated by the Solicitors Regulation Authority SRA no: 536938 and is a limited company registered in England & Wales under no: 07111457
Copyright Darton Law Limited | All Rights Reserved